Many years ago as a university student in biology, I knew that I would have difficulty in subjects such as mathematics, physics and chemistry. What surprised me was to note the difficulty that a subject such as zoology could present—due to the enormous number of worms and insects that filled hundreds of pages of textbooks. At the time, I wasn’t very fond of these critters and couldn’t wait to study mammals, even though the metabolic and functional solutions of the former were worthy of admiration. Efficient solutions that were present in the humblest of animals were almost identical in humans, changing the needed details.

Until recently, when I felt the need to rid my horses of the parasites that plagued them, I hadn’t thought much about zoology, with its various forms of life.

Worms and insects are one of the burdens that horses and their owners must bear. In the past, it was thought that complete liberation was possible. The same was believed about the plasmodium of malaria for humans, but unfortunately, the parasite developed a resistance that has made the eradication of the disease impossible. The World Health Organization, WHO, has long settled on a more humble control.

In the past 50 years, various types of dewormers have been produced and alternated on the market at ten year intervals. Some of these products are still somewhat useful and sold commercially. All have slowly lost much of their efficiency, because the parasites, or better to say some of them, have developed a certain resistance over time, and survive the recommended dose that doesn’t seem to have recognizable side effects on the horse. From the arrogant claim of complete eradication, we have passed to a more attainable objective—simply controlling their number. Pharmaceutical companies exert pressure on vets and owners for a more knowledgeable use of their drugs, and to reduce the infestation of pastures through management behaviors which involve cleaning, field rotation, and the addition of other herbivores to share pastures. Ultimately, a combination of drugs and horse management procedures are implemented to control the diffusion of parasites.

Knowing about the life cycle of parasites and their strategies for survival would surely help owners in controlling them. I don’t intend to repeat a lesson on parasites here that can easily be found in books or on the internet. Without going into details that wouldn’t interest most owners, a few years ago, the “Bad Bug” series of articles in The Horse was both thorough and simple. There were 12 articles, one per month, starting in January 2004. With an online membership, you can download here.

A few months ago I bought a short course by Dr. Kellon on the subject to see if I could learn something new: Deworming.

Numerous other sites, both professional and non, give an introduction to this tiny world. For example:
http://www.leica-microsystems.com/products/by-application/education
http://www.amicidelmicroscopio.it/index.php

In synthesis, it isn’t efficient to indiscriminately and periodically deworm all the animals in a herd or the only horse in the yard.

The most efficient method of analysis can’t be qualitative and the simple observation of parasitic eggs in the feces isn’t enough. We need to: 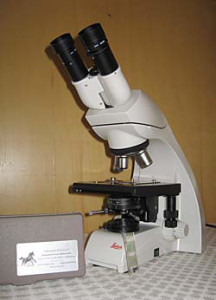 This is not something that is highly complicated. The procedures are simple, and the materials and instruments can be obtained at the same cost as a used saddle. Observations can easily be done by whoever has the patience to learn how, alone or with the help of a qualified professional.

For a description of analytical methods and an overview of the life cycle of parasites, see the articles and courses listed earlier. The analytical method can also be found on the Chalex Corp. website. American citizens can buy the counting slides, suitable microscopes and simple glass accessories directly from them: www.vetslides.com. You may not necessarily have to buy a microscope. You could find one in your child’s high school and get his science teacher involved, ask your vet if you could use his, offer a beer to your doctor…

In short, you must:

To site an example and illustrate the practicality of this system, I’ll describe a recent study done in Tuscany, Italy, on 18 school horses sharing a 90 hectare pasture. The horses are all barefoot and of various breeds and ages, and earn a living in a natural equitation center directed by a 3 star Parelli instructor who generically dewormed the herd 8 months previous to this study. All but two of the horses, indicated on the graph with “mare DE” and “foal DE,” are veterans of the location and have had similar diets and lifestyles. The two guests are a mare and her foal, both of which were stabled until their transfer from Germany to the center for training. The mare left before the second observation was done.

In order to gather the manure needed, the horses were temporarily transferred twice into previously cleaned single paddocks for a few hours.

The results of the observations and FEC (fecal egg count) of strongyles are represented on the graph (shown next page).

Roundworms were very rare and randomly present in the group.

The methods used in biology have a given sensitivity and limit and therefore exclusion of parasites is impossible. The specific method in this case (modified McMuster) sets the minimum limit at 25 eggs per gram. A FEC below this limit can only be considered low and the number of eggs in the sample is established as inferior to 25/gr.

In microscopic observations, strongyles and roundworms can easily be seen. Other parasites are difficult to trace. Flatworms, above all, deposit their eggs in a discontinuous manner. Not finding their eggs does not necessarily mean that there are none. Finding them is an occasional event. Horses that were without any eggs in the observations were assigned a FEC of 25 on the graphs, so that the position of the animal and its relative importance in the herd is evident.

More adult worms in the intestinal lumen means more eggs in the pasture. Strangely enough, the individual with the highest infection was one of the guest animals, a three year old filly that had previously lived in a stable and not at pasture, and that was periodically treated with dewormers.

It was decided to treat initially the animals with a FEC above 500 eggs per gram.

There have been 3 levels of infection found by many parasitologists.

Usually a FEC of 150 would be considered the limit for an intervention with treatment. 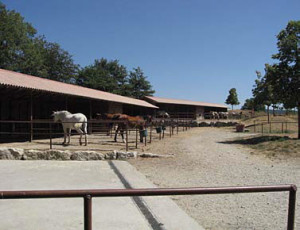 The motive behind the choice to initially only treat the animals with a FEC above 500 comes from the present article and is based upon the need to respect the owner’s idea of natural herd management and to limit certain metabolic disturbances caused by the drugs. Some of the horses in the herd have a more or less recent history of laminitis and any treatment, be it deworming, vaccinations etc., must be carefully evaluated.

An example—a summary of Dr. Ward’s research “ Vaccines and vaccinations” can be seen on my website in both Italian and English, and suggests a connection between vaccinations and laminitis: www.bitlessandbarefoot-studio.org/vaccini-e-vaccinosi/

After treating the animals with a FEC higher than 500 with Ivermectin, a second important observation was performed.

The treatment had positive results on the six horses treated, five of which decreased infection by 99% and one by 98%.

Regarding the results, I must say that even though I am familiar with laboratory research and analysis, and that I used a method of gathering the feces and recording the observations as standard as possible, the contamination of a sample or an error is always possible and facilitated by the working environment.

The purpose of the second observation is to verify the actual reduction of the parasite infection. A reduction inferior to 98% would be by convention considered unsuccessful and would indicate resistance to the drug by some parasites.

The second observation on the animals that weren’t treated is also fundamental, yet always ignored. It is needed to confirm the outcome of the first observation, and retrieve other animals for treatment. It is a type of litmus test.

Two individuals among the horses that weren’t treated showed a substantial increase in FEC in the second observation.

One horse that went from a FEC of 350 to 925 was subsequently treated showing the importance of the second observation on all the animals in the herd!

The other individual showed an increase in FEC from 300 to 425 and made us think… This horse has had a difficult history of laminitis and even though there was the desire to disinfect strongly, it was decided to wait until the autumn to treat him, so that the larvae of other parasites could also be eliminated with a single treatment. In fact, in autumn, the adult bot insects die off and stop laying eggs on the legs of the horses (which cause infection after they are swallowed). 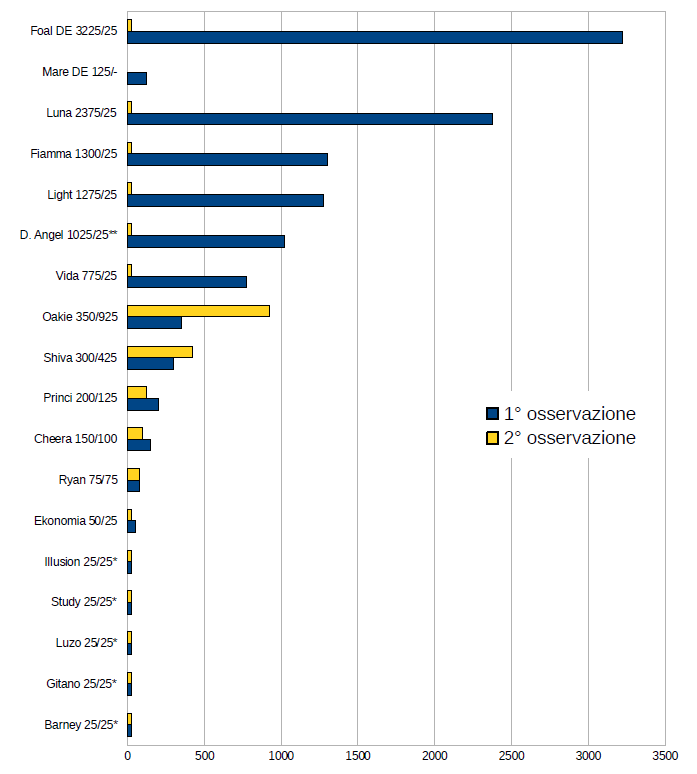 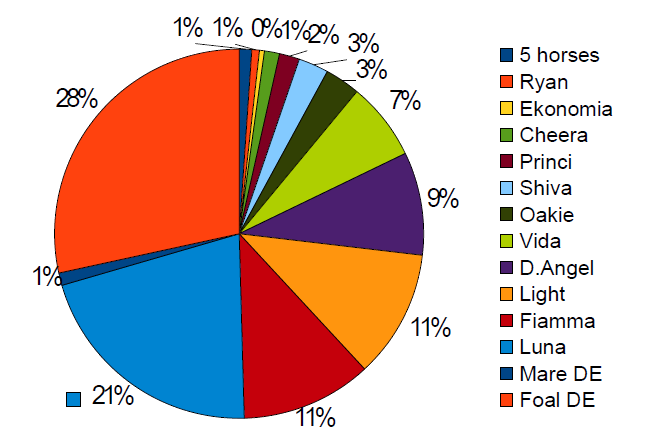 I thank Mr. Edwin Wittwer for his hospitality at Asvanara and Mrs.
Meg Lynner for the translation, and my wife Rossella for the graphs.
For comments and additional information I can be freely contacted at:
dr.francobelmonte@gmail.com
www.bitlessandbarefoot- studio.org 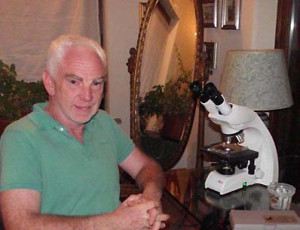 About the author: Franco Belmonte is a biologist who lives in Italy. He created the Bitlessandbarefoot-studio Association, and takes care of its website (www.bitlessandbarefoot- studio.org — an educational site in both Italian and English). His barefoot horses pull carriages and work in the fields. His work consists of practicing, teaching, and spreading the barefoot method and techniques. He organizes seminars on barefoot and other topics, such as parasitology and systems of parasite control in horses. You can read more about Franco in his previous articles in The Horse’s Hoof Magazine PDF editions 42 and 46.