A “club footed” horse is defined by most people as a horse with one hoof that grows more upright than the one on the other side. Normally we’re talking about the front pair of hooves. Most farriers have treated it as a hoof problem and worked to make the pair of hooves match each other, but it is my opinion that this is a backwards way of looking at the problem.
When a problem above the hoof limits the range of motion of the foreleg, the hoof responds by becoming more upright. This is the horse’s attempt to find some measure of balance in an unbalanced situation. This does not take all of the responsibility from the farrier. If left unchecked, this pattern will become more severe over time. Each hoof needs to be treated as an individual and trimmed for uniform sole thickness and to grow out any wall flaring. Meanwhile, we should try to identify and heal the true problem while understanding that the deformation of the hoof is only a symptom of that true problem.
I’ll lay out some of the problems that can lead a horse’s hoof to become pathologically upright, and some treatment options. In every case, the best a farrier can do from a trimming standpoint is support healing by trusting what the horse is trying to do and maintaining heel height at the live sole plane on each individual hoof and allowing the sole to build under the tip of P3 to normal thickness.

Suprascapular Nerve Damage
From my observations in the field, this is the most common. Square up the horse while someone holds the mane out of the way so that the withers and the shoulders can be viewed from behind. You may have to stand on a bucket or something to get this view. If the shoulder on the side of the club foot falls away from the withers more steeply or is smaller, nerve damage is probably your culprit.
There are two muscles that run along the outside of the scapula (supraspinatus and infraspinatus). Their primary job is actually that of a ligament; to hold the scapula against the body. The reason they are muscle, rather than ligament is for increased flexibility. These muscles are innervated by a motor nerve (suprascapular). If this nerve is damaged the muscles cannot contract as well.
The nerve is usually damaged during a one time event. The foreleg is extended and under power, and suddenly looses traction and slips backward. When this happens, the lack of nerve stimuli allows the muscle to contract and become a more tendonous type of material. Fortunately, the shrinkage of the muscles and their replacement by connective tissue forms “functional” ligaments (Dr. James R. Rooney) which continue to do the job of holding the scapula in place, but with a limited range of motion.
In severe cases, this is commonly called “sweeny”, but I see it very commonly to very slight degrees. The hoof adapts to the reduced extension of the foreleg by becoming more upright. Most people only notice the horse’s resistance to turn in that direction, pick up that lead or perhaps that their saddle is always shifting to that side.
From a medical standpoint, the nerve damage is irreversible, but I have seen massage therapy and daily stretching significantly help the situation. Anything that increases mobility of the limb (massage, stretching, exercise) will in turn “normalize” the hoof. I have heard one veterinarian and one massage therapist who use electric therapy to stimulate muscles claim they can cause nerves to “jump” into the muscles, reversing the problem. I have yet to see it with my own eyes, though, so if anyone out there has documentation of this, I would love to see it.
Tendon Contracture
Tendon contracture is a misnomer. Tendons do not contract beyond their rest length. The muscles that work the flexor tendons can and do contract for many reasons. An overfed foal can “outgrow” the muscles and tendons. A stall bound horse can have simple muscle contraction due to a lack of movement. Any injury that causes reduced use or movement of a limb can result in muscle contraction. The list goes on. Either way, if this is suspected, a competent vet and farrier need to have their heads together and be on the job. Again, exercise, routine stretching and massage therapy may be the best cure and routine hoof care throughout the horse’s life and plenty of exercise are the best preventatives.
Voluntary Pain Contracture
Very often, pathologically upright hooves are caused by a horse moving to avoid pain. The result of this will often be increased musculature on the “club” side. Any of the problems in the back of the foot discussed in my “Navicular” article (www.hoofrehab.com) or many other injuries, advanced thrush or improper trimming can cause a horse to continually land toe first on one or more hooves. The heels react by “reaching” for the ground and becoming more upright. Again, identify the real problem and work to correct it while simply trusting the live sole plane on each individual hoof while trimming. The heels will almost lower themselves as you fix the real problem.
Pastern Injury
Another thing to check for is pastern joint mobility. If a joint is “over flexed” (a horse stepping in a hole, etc.) the articular cartilages that surround the bones can be damaged. As the body attempts to repair this damage, new bone can form and the result over time is a “seized” or partially seized joint. Again, this limited range of motion can cause the hoof to adapt to a steeper form that supports the horse as well as possible. Hacking down the heels in this case can only add pain and more damage.

At the setup trim I found lameness on the left side and comfort in the right club foot. The left heels were being allowed to grow unchecked and wedged. The sole at the toe was severely thinned in an attempt to make the angles match. most of the front left pain was caused by the crushing of the long under run heels.

The second set of photos was taken one year later. The horse is very sound on both feet. Did I fix anything? Not really; I just accepted the angle differences this horse needs and didn’t go to war them.
Although the veterinarian and a skilled massage therapist have been unable to pinpoint the source of the imbalance, we know it’s there, somewhere. Fortunately if we just listen to the adaptive capabilities of the hooves, the horse can form exactly what it needs to compensate.
Trust that sole and don’t allow the walls to flare! The result again, was another barefoot horse outperforming its former shod self.

Any club foot that has been around a while will have a sensitive, unused, underdeveloped frog/digital cushion. You can fix everything else and still have the back of the foot too sensitive for the horse to land on, which will cause the shortened stride and resulting club foot on its own; another vicious cycle. Using foam hoof boot inserts and pea gravel loafing pens to develop the digital cushion and callus the frog will break this cycle like nothing else.

The bottom line to all of this is that you can’t force a hoof to make a horse sound. Almost always, I am called to club foot cases when the horse goes lame on the normal side. This is usually caused by people trying to force the hooves to match each other. This thinking often leads a farrier to cut the sole out from under P3 at the toe and allow the heels to grow unchecked on the normal foot. Two wrongs don’t make a right. Treat the hooves as individuals, figure out the true cause of the club foot and see if you can help the true problem. As you fix or partially relieve the problem, the sole at the back of the upright hoof will turn into chalky material, indicating that the body is ready for you to lower the heels. Meanwhile, the horse will be more comfortable and move in the most balanced way possible to support daily life and healing. 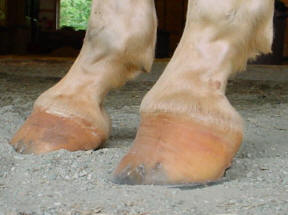 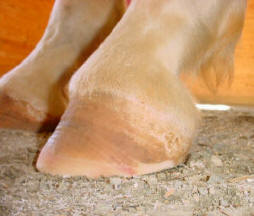 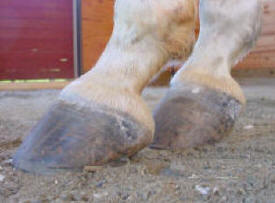 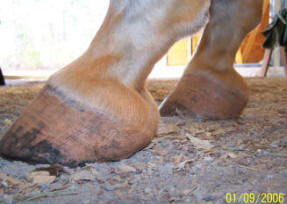