L’originale in italiano segue la traduzione in inglese. Translation in english thanks to Shona Hagger.

Pieve Santo Stefano. February 13th -14th 2016.
Summary and comments of activities.
At the 2016 barefoot trimming weekend in Pieve Santo Stefano fifteen horses were trimmed and fourteen people of different ages, physical condition and preparation took part. It was evident to everyone the need to satisfy the following important requisites:
First, physical strength, and the ability to put yourself in the different positions necessary for the work of cleaning and trimming: flexibility.
This can be obtained simply through regular cleaning and disinfection of hooves, which should be more frequent if the animals have restricted movement. Second, manual dexterity in using the tools. At this level, we are only using the rasp, which must be of good quality and in good condition. The beginner can practice a series of manual activities that include the use of tools. Working on wood, smoothing surfaces, creating curves and making simple joints. The eye, dexterity and speed will increase rapidly. Then learning to place the animal properly balanced on three feet with the hind legs the correct distance apart and forming a triangle of support.
These all provide an important initial advantage and the necessary conditions to start trimming. The use of sand paper between trims helps train the owner in manual dexterity and position and lengthens the time between professional trims. Sanding should be followed by the use of the fine side of the rasp and then the coarse side and so on.
But, back to the conditions, having developed the ability to withstand the weight of the hoof, to have the animal standing properly and knowing your tools now you need a work plan. Hoof knowledge, knowledge of the function of each part and understanding the work to be done to deal with the growth not worn down by the horse or donkey in daily movement.
The Asvanara horses showed participants how little remains to be done by man to animals that live free in large spaces. Not that this ‘little’ is unimportant or easy. The less there is to do in the trim the easier it is to make blunders.  More over if the foot is in rather precarious conditions even inexpert trimming can perhaps lead to some positive results. Horses who have the freedom to move in large spaces need fewer trims over time. Edwin Wittwer’s Asvanara horses had not been touched since the end of the previous season, for five months. On various terrain of forest and meadow, but not soft and muddy, if not in some areas,  drained thanks to a long dry winter, their frogs were acceptable despite lack of daily or weekly disinfection, their soles were free of exfoliation material and included bars protruding from the sole surface just enough to perform their function, which, among others, is to partly support weight and provide grip.

The walls, worn down with continuous motion, allow the other parts of the hoof to perform their job correctly. A short wall  leaves the other tissues in contact with the ground, active, abrasive, clean, healthy.
We did not see any horse with chalky deposits on the sole, so common in shod or barefoot horses stuck in a small yard or in a stable and deprived of the necessary increased activities with man. No frog corroded by infection despite the season, with its dampness although the rainfall this winter has been scarce. No bar that grows insistently downward in search of load redistribution. Inactivity, or the wall left too long in relation to the penetrability of the ground, on the contrary reduce the function of the frog, sole and bars resulting in weakness, infection and excess growth. No frogs, no bars and no sole were touched in two days.
In no horse.
Remember. Only one horse showed signs of chronic laminitis. I intervened on that horse but did not have the opportunity and time to discuss the disease with the attendants. Beginners.
We restricted ourselves to work on the wall ‘adjusting’, height, reducing just a little and in some cases not at all; reducing the height of the wall sections where due to defects of balance the wall was of different heights on the medial or lateral side. The pigeon-toed horse, loading the outer wall (lateral) of the hoof requires the reduction of the inner wall (medial) and vice versa, the left-footed. If it were possible and necessary the hoof wall was reduced all around the perimeter. Where the toe was more consumed than the heel, the heels were gently lowered, taking into account the desirable position of the solar surface of the third phalanx towards the land but also the stabilizing function of the heels in penetrable soils and possible increased sensitivity and resulting toe landing caused by over trimming in the case of insufficient maturity and density of the rear part of the foot. To this end we introduced hand measurements, signs and drew lines to help provide information for determining the quality of the rear part of the foot and its support platform.
The reduction of the eventual height of the wall, the consideration on the heels and their height I also explained in the classroom to establish a common and repeatable language useful for the transfer of information as an operational first step.
Subsequently working with the rasp in a plane perpendicular to the first we eliminated, over the whole perimeter, all the excess from the ideal foot, making it roughly equidistant from the outer edge of the sole. We also highlighted through contour drawing how this ideal and the work of each trimmer is affected by individual perception. The work of one cannot be, because of a different perception of reality, identical to the work of another even if the average thickness of the wall is imagined by both to be that of the wall portion comprised between the quarter and the toe. We named this step 2, we created a length of the wall or part of it perpendicular to the support plane. This way we identify two points close to each other on the wall, one in contact with the ground plane, the ground or the concrete of the yard, the other a short distance above it which, together with the point where the changed slope of the wall would identify the mass of the wall possibly removable for the reduction of flare and ‘harmonization’ of the sections of wall with one another. Possibly, because it is not said this always occurs nor that it is always desirable as it is not always desirable to make a more elastic and yielding hoof capsule. In my teaching and operating system the owner or the beginner should still refrain from this and limit themselves to the first step intended to reduce the height of the wall, the second step intended to contain it as described and finally the realization of the ‘bevel’. Working in steps 1 and 3 from below and in step 2 in contrast, with the hoof resting on a tripod or held in the air while the other hand works.
In operational step 3, we performed the wall finishing work. Not the famous roll, of which we have discussed limits of use and method of execution, but with a bevel or a plane with its origin in the water line and at an angle of about 30 °- 45 ° to the support surface. This bevel useful to redirect the forces applied by the ground to the wall for the benefit of the containment. A bevel that horses present in the vast majority of cases when sufficiently free to move on penetrable ground. Grass, soil, sand, stones. In our case at Asvanara it came down to redoing a bevel already present after reducing (though not always and not on all the perimeter) the height of the wall. Then just to round off the sharp edge which is generated for the safety and prevention of accidents in contact between one horse and another. Not much, just what was needed.
We described how with the bevel we create the breakover in a mechanically more favorable area.
The work, even though executed by beginners under tutors and many horses was possible despite the weather because a covered concrete yard was available. You cannot put enough emphasis on this last condition for the necessary smooth operation of a trim. The homogeneity of the condition of the horses should draw attention to the direct relation of the environment with the general state of the hoof.
In the future and other articles I would like to see these work steps efficiently. Referring to an healthy horse and the owner at work. 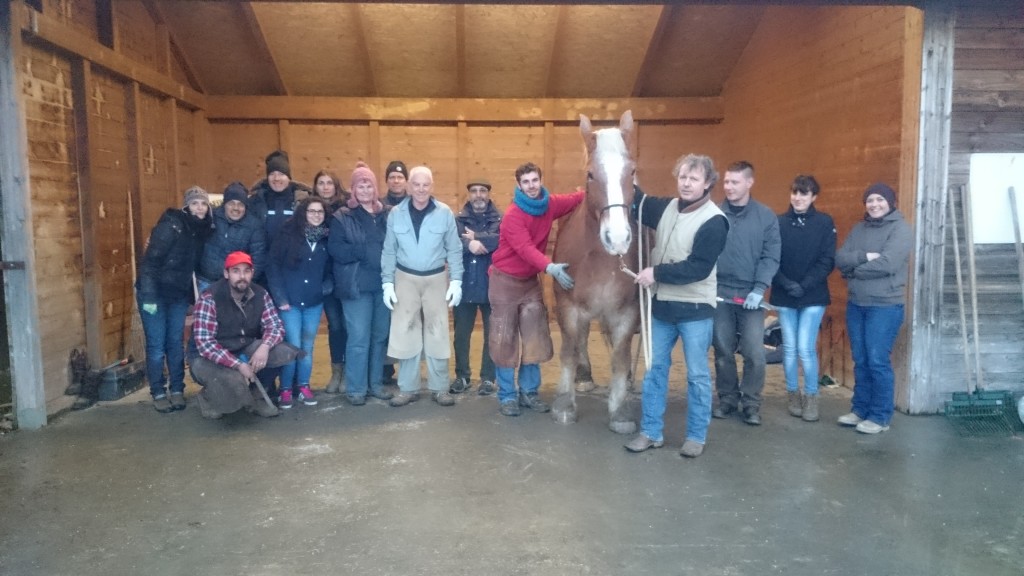