I know there`s quite a few of you out there that Drive bitless and barefoot, I don`t but I have a dear friend in Italy that does, and he is a barefoot trimmer too. Below is an article that Franco had published in “Long Reins News” in Italy.

I hope you all enjoy reading it as much as I have. And hope it gives inspiration to those who are thinking of driving bitless and barefoot. At the bottom of this page are more pics.

The following article was published inside “ Long reins news” edited by the Italian Driving Society and “The Horse’s Hoof” n° 42, spring 2011

Those of you who read the previous story published in the No. 2 of 2009 issue already have an idea of my life with horses. I saved them from the butcher when only six months old; at that age I could not bring them in front of a carriage!

While growing up I had time and opportunity to establish a relationship with them made of nothing but being together, movement, body language through dialogue until the time came to put them in front of a carriage. So heavy as they are now, 900 kg., they can move fast and elegant, I like to to observe their proud step trot.

Perhaps because it would be like going with a tractor on the highway I just go for walks and hikes in the country rather than perform gymkhana and cones. At least for now.
My walks are limited … regrettably by the condition of the roads in the region and the negligence of humans. Italians are able to transform into small dumps all is not delimited with barbed wire.
Patience, this has not prevented us to do a research that is being ongoing and try a specialization.

Let me introduce some passages of the preface of “The mountain in my way” by Reinhold Messner and to comment it briefly. That explains easier my way to coach and go for a walk with the horses.
I do not compare myself with him …. I found similarities on which I stopped and thought.

The next step belongs to him.
“… in a desert I miss the water, if I face the polar sea in winter I miss the light, if I choose Antarctica I suffer the cold, if I go into the jungle I miss orientation….. the man is weak … he builds around himself a safety net; aircrafts, helicopters and sophisticated technology reduce the environment to his needs giving up his natural limits …

Messner does not think that adventure is what is lived hiding the failure, eliminating the risk and inconvenience. The risk in a performance increases as exposure increases. Greater the exposure greater the fragility of balance on which the man relies when he faces the nature.

Adventure is not fly over the Borneo with a twin-jet!

Hence his renunciation of mechanical means, “aid” of any kind to find his limit. Better give up an ascension rather than cheat with the mountain through the use of artificial means. Mind you, not search the limit for the silly thrill of danger, but training and method to overcome it and move it every day a little ‘further.
So forego the expansion nails or returning to the horses, giving up a restraining harness. Renunciation of the oxygen cylinder as the unshod hooves, a satellite receiver as a Liverpool bridle. For him, the exclusion of a fellow traveler in exchange for loneliness and for me the brakes.

My horses are not shod, rubber shoes are the only occasional safeguard for the front hooves.

They have no bit. A dr. Cook bridle, a specialized halter.

They have not blinders. They may supplement their senses and see where they put their feet, but be scared for a newly installed electric gate.

I do not carry a whip. I trust in my voice and the reins by a harmless pressure on the muzzle.

And with this philosophy in dealing with things in an “unnecessarily dangerous” I’m going to coach. I certainly can not go anywhere I want, sometimes I must choose a longer route but feasible for the hoofs of my barefoot horses .

We are forced to find a way. I can not find it prepared, drawn, straight, short.

Sometimes the animals make me to realize that it is a wrong day.

I am limited, however appeased by what gradually becomes possible. With more serene and healthy horse without mouth and feet hurt by the iron.

In the same tight relationship of extreme trust in the animal, I find satisfaction to make gestures become useless with the horses.
Gestures that have lost the sense they had, in a world that does not move by horses recognizing the KW unit.

Here is a step of the great Reinhold:
“… I have tried to assume an attitude of extreme modesty and respect. It’s so that I began to learn body language, I began to express what I thought and to experience the world at the speed of a pedestrian … proceeding at the speed of those that are walking, climbing or flat .. ”

It seems written for us. 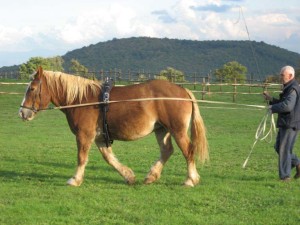 Pic of Franco long lining and training. The horse is a TPR, her name is Allegra.
The whip is used only to touch the horse and to reinforce the vocal command turning left or right.

Working elephant no reins and barefoot 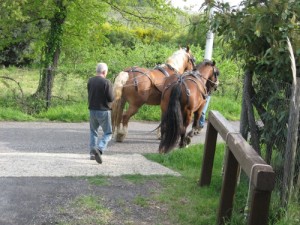 Funny, Schnappi, Noriker breed. 4 years old. Training in pairs.
Barefoot, not yet bitless. I had my first dr. COOK BITLESS BRIDLE
thanks to Alberto Barozzi (bitlessbridle Italia) few days after.

Hi from Yvonne,
Spring is here! Thank you so much for all your contributions to our new Issue 42 (Spring 2011) of The Horse’s Hoof! It will be officially released tomorrow, March 20th, 2011 (1st day of Spring), but you get to see it first! Happy hooves & “Go Team Barefoot!”
Thanks,
Yvonne